At approximately 330m high Eagles Rock in Glenade, County Leitrim is a true monster of a free standing tower/pinnacle!
And so, with an ominous text "Can you Play?" from Stephen "Jock" Read another epic adventure was underway! :-) Joining Jock and myself on this quest was Stephen McCann, Stephen is a trainee FAS outdoor instructor and is spending a month with Unique Ascent as part of his year long course and this was his inaugural visit to the shadowy world of adventure climbing and The Realm's of Chaos.

We met in a sunny county Leitrim and began to sort a huge collection of perhaps to the untrained eye, non standard rock climbing equipment for the mission that lay ahead. Our rack included technical ice axes, 2 alpine hammers, 20m of 12mm polyprop, 23 assorted pitons of various vintages, 2 snow bars, several mallions, a huge standard climbing rack and of course, 3 enormous grins. 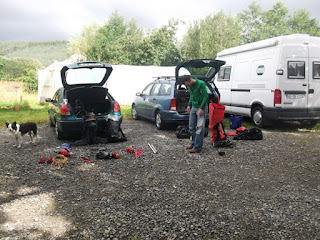 Having sorted the rack and divided it between the three of us we headed out for a days recce of the tower. Jock had made an extensive research of our objective and was armed with an account of the first (and only?) ascent of the tower. From the road end the tower looked suitably tetchy and as we walked closer the apparent tetch became outstanding, this was indeed to be an epic adventure.

The west ridge of Eagles Rock

The east ridge of Eagles Rock

We spent the first day trekking around the base of the tower surveying the climbing potential and finding the original 1971 route to the summit, which climbs three pitches up the east face of Eagles Rock. The rock, the route and the location were suitably atmospheric, having had enough of the glorious sunshine and fresh air Jock disappeared underground to inspect a cave system, whilst Stephen and myself sat in quiet contemplation of tomorrows task at hand. 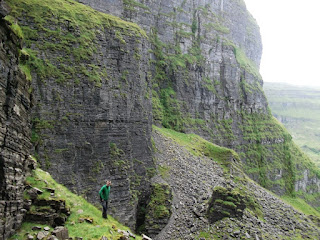 The view from the start of the route

The following day we once again arrived at the base of Eagles Rock having left all our climbing gear at the base of the tower the previous day and having taken the Eastern approach we arrived in quick time, psyched and ready to climb. We racked up and scrambled to the base of the 1971 route which starts at approx 280m above sea level and is a mildly scary place to be.
Without further ado Jock led the first pitch to the grassy topped pillar over looking the abyss. I joined him on this lofty perch and he led the second pitch to the summit of a semi-detached pillar, this pillar appeared to be about 20,000 tons of boulders defying gravity and held in place by a miracle. A swift decision was made and Jock led the final terrifying grass pitch to the summit.
Which of course left Stephen and myself to follow Jock to the summit, watch the attached film, it was without a doubt the most terrifying rock climb we have all done to date. :-)

A wee film of our Ascent of Eagles Rock

Jock on the summit of Eagles Rock 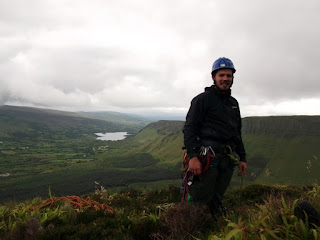 Stephen on the summit of Eagles Rock

Once all three of us were safely on the summit we roped up alpine style and explored this most outstanding summit plateau. The entire plateau is covered in a super thick carpet of the most luxurious soft bouncy heather and gives mind blowing views towards Slieve League in Co Donegal and over the summit plateau of Arroo to the north.
Alas the abseil descent of the route was as scary as the ascent and it was with great relief that we all arrived back at our start point.
Posted by Iain Miller at 14:41