And Sho, as the summer wears on with its usual mix of tropical and not so tropical days, the current to do list was crying out for attention. Quite near to the top of the list was a rather cunning plan to free solo the landward face route on Centre Stack just off the north face of Tory Island. (Tory Island guidebook is HERE)

Centre Stack (more detail HERE) was first climbed in 2009 by Phillip "Chuck" Stevens and Martin Boner, they climbed the full stack height arete running up the sea ward face in two pitches. The second ascent of the stack was in 2011 when Wolfgang Schueller and my good self climbed the slightly intimidating looking landward arete at Severe.  It was then, in 2011, that a first thought that this route would make a superb free solo began to manifest itself.

Free soloing is quite simply climbing without any ropes or other protection, so for most part a fall will potentially be terminal. The moral of the story is you can not fall, which in turn focuses the mind onto the present in a way that very few other activities ever could. Of course, it is not without a bit of concern that you endeavour to play out in this manner. 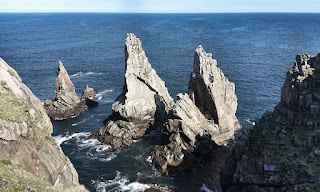 Overlooking the stack from the clifftops

Once the decision to free solo the stack was made it was simply a case of waiting for the weather, tides and sea state to all play ball and once the planets have aligned in a suitably calm manner then the games begin.
On the Sunday in question I caught the 11am ferry from Magheroarty on mainland Donegal and travelled the 14km out to Tory Island, this meant I had to be back on the cliff tops on mainland Tory by 5pm latest to catch the ferry home. I have found that time is the key to gauging progress in all activities where concern can overwhelm. For me it is a mini internal relief valve as I always have a cunning timescale in which pretty much each stage is double the length it realistically needs to be, a bit like John Cleese in the film Clockwise. It is also a case of ticking as many unknowns as is possible before they become a problem. The case of a sea stack on Tory Island the greatest unknowns are sea state and weather, especially the amount of sea motion in the channel between the stack and mainland Tory. This 50m sea passage is prone to monster seas as it is open to west to north seas and off course being 14km west of Ireland in the Atlantic it is never easy to gauge from the mainland of Donegal. 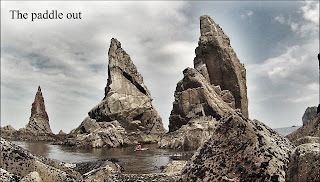 The short paddle out


Arrived on Tory at about 11.30am and after an audience with The King and Moira ni Gallagher I headed across the island and at this point I was moving as quick as I could. Up to this point it was only an educated guess as to whether the sea channel to the stack would be crossable or whether there was too much west to north sea on. Once overlooking the stack from the clifftops it was game on, a bit of northerly ripple in the sea below but nothing to stop the mighty dingy on its voyage of foolishness. 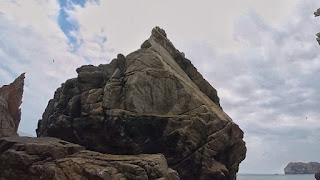 Looking up the route

A swift rigging of the 50m single from the clifftops to the storm beach below and I abseiled to the Tory mainland exit point on the house sized boulders below. It is only once the process has began that the sense of equilibrium can be achieved as it is all to easy to say, no i'm too scared and simply stop and return to the Tory Hotel to drink coffee with Moira.
I inflated the dingy and made the short calm crossing to the base of the stack. Once at the base of the stack I decided to only take one of the 6om half ropes as weight and the overhanging start of the route made me feel a bit uneasy. This would also mean finding a second abseil point on the stack as a single 60 was going to mean two abseils from the summit back to sea level. This was a minor cause for concern but was vastly overshadowed by the weight of the second rope and the ever spiraling thoughts of falling. 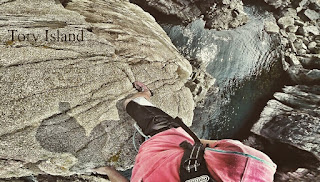 And Sho, I began to climb, the first move of the ground is the hardest and makes you commit to a bit of a lunge for a flat hold. Once you reach the hold you bring your feet up to a small stance and begin to feel sick as you are now committed at 5 ft off the ground, 30 ft above the sea, 100ft from mainland Tory at the base of a 45m stack and below a 50m sea cliff surrounding you from the Tory side, which in turn is 14 km west of the Donegal mainland. You are, off course totally alone having told no one where you are or what you are doing except "heading out to Tory."
It is now, once you are committed to the climb that real mind games begin. 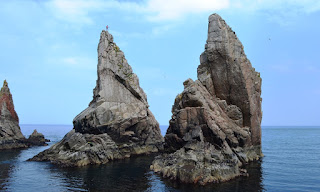 Standing on the summit of Centre Stack

I climbed a couple more moves onto a good big sloping ledge, where Wolfgang took a belay on the first ascent, 7 years previous. From here I followed the easier angled cracks to a bulging overlap at about 25m above the sea. Climbing through this overhang is by far the most exposed part of the route and a couple of big easy moves on jugs takes you to a stance above the nose. Standing here was the moment I knew everything was going to be good, as the climbing above was nice Severe ground and I also now knew I could abseil in two pitches from the summit on the doubled 60m. 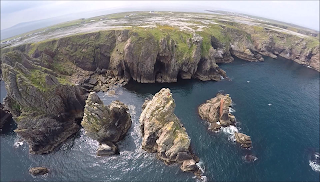 The Toes of Balor

Sea stack climbing is an extremely foolish activity in which the consequence of getting it wrong can be death. Free soloing sea stacks is a mind bending game in which each and every action has an equal and opposite reaction. Alas the odds are also heavily stacked in the sea stacks favour with hundred of good reasons why this is a bad idea. The equal and opposite side of this is the overcoming of primal fear and loathing that comes from meeting and facing the inner you, your most tricky opponent.